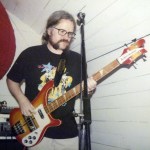 I’ve never made much money playing music, so you can imagine my surprise when I received a 1099 from BMI saying I had earned $1456.80 in royalties last year. You might also imagine my confusion, for while I’m registered with BMI, I’ve never registered any songs with them. Where had these royalties come from? And more to the point, why had I never received any money?

I wracked my brain trying to think of how this unexpected windfall might have manifested itself. A few years back I had worked with an artist who had offered me points on his recording, but that relationship ended when he flaked out and accused me of “sabotaging” him. So I doubt I was seeing any money from that. The Raving Knaves? I couldn’t imagine our online sales amounted to that much money. Besides, neither of the other two had ever mentioned seeing any royalty checks. Time for some investigating.

The obvious first step was to log into my BMI account. Easier said than done; I’d forgotten what the password was, as well as the answer to the security question, “What was the name of your first pet?” I tried several answers, but finally had to call my mother to jog my memory. What was the name of that dog we had that was hit by a car when I was five? Nope, that’s not it. The guinea pig I had when I was nine? Also a blank. Turns out it was the name of an obscure cat that we had briefly when I was a teenager, before he too was run over.

With answer in hand, I was able to get into my account. According to the royalty statements, the money came from a song called “Man in Motion” that was played multiple times on a network news show. I’ve never written a song by that name, and the only one I can think of with that title is the theme from “St. Elmo’s Fire”. I called the BMI office in Nashville and left a message.

While waiting for them to call me back, I pondered the irony of the situation. I’d been playing music for decades, and the biggest payoff yet was from something I didn’t even do. It was faintly insulting, almost as if the Universe was mocking my attempts at success on my own terms.

The lady who returned my call was very polite. She seemed surprised that I was disputing the ownership of the royalties, though. “Well, these are yours,” she said. “Could you have forgotten you wrote the song?” I suppose they deal with a lot of that down there; perhaps Ozzie Osbourne calls them when he forgets his last name. I explained that it couldn’t possibly be my song, and was informed that I was the only Daniel Bayer registered with them. She said she’d call around and see what she could do, though.

I looked up the song itself through the publishing company’s online catalog. It definitely wasn’t mine, or anything I would have written. I could see why a news broadcast would use it, though. Full of rolling drums and urgent bleeping and blooping, I imagine the voice of Dan Rather intoning, “Tonight on the CBS Evening News… The US and Canada, countdown to Armageddon.” I’m also surprised at how much money you can earn from someone using 30 seconds of your music. The writer probably made more than a lot of people who wrote an actual hit.

Sure enough, I get a call back: it’s a mistake. BMI’s system got me confused with someone with a similar name, so no royalties for me. I’m glad it’s going to the right person, but part of me is a little disappointed. For a few minutes there, I actually knew what it felt like to be a semi-successful songwriter.

Filed Under: Blog
← Matty Sheets and the Blockheads at the Scuppernong Books grand opening
Before the Snow →