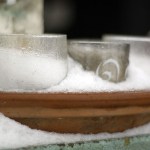 Some people are just assholes. Sometimes it’s their own fault and sometimes there are extenuating circumstances, but they’re still assholes.

I’m standing at an apartment door in a small town somewhere in North Carolina. There’s a snowstorm coming on, and I’m rushing to beat it, trying to deliver as many prescriptions as possible before I have to turn back. I’ve delivered here before, many times. It’s a woman and her adult son. She’s disabled, and I have the sneaking suspicion her son is a drug addict, or has some other issue. He’s usually crashed out on the couch when I’m there.

“Come on in,” she says, pushing back a small, yapping dog with her foot. Is it a Chihuahua? I can’t really tell. Maybe it’s a terrier of some sort. It’s black and white.

“How are you doing today? Ready for the snow?” The old weather conversation again. Always a safe choice of topic; anything else usually results in a long litany of personal woes. Usually I’m willing to listen, but today I’m in a hurry.

She sits down to sign for the delivery. That’s when Junior, in a display of energy I’ve never seen before, leaps from the couch and smacks the still-barking dog.

“Goddamn it, shut up!” I’m used to people hollering at their dogs in my presence, but this is the first time I’ve actually seen someone strike one. The dog whimpers and falls silent.

“If you don’t get rid of that goddamn dog, I’m going to!” the son says, before returning to the couch and whatever dreams lift him out of this dreary environment. I look around the apartment. It’s a wreck, garbage everywhere, flies crawling up the wall, dozens of them. An unknown movie blares from the TV. His mother just ignores his outburst; she’s probably seen it many times before. I adopt an air of feigned joviality and continue helping her to fill out the form, but part of me just wants to yank him off the couch and throw him through a goddamn wall.

I don’t say anything, because in part I don’t know what the dynamic is between them. Maybe she was a shitty mother when he was growing up, and he’s just repaying her in kind. Whatever their dysfunction, I’m not sure why the dog has to bear the brunt of it though.

I return to my van and try to relax. This is the second less-than-prodigal son I’ve encountered this week. On Monday it was the one who disappeared on a three-day drug bender, leaving his mother and another wheelchair-bound person to fend for themselves until a grandson could get there. Addiction must be a terrible thing, to cause a son to abandon his mother. Not that I’m helping matters any; more people die from prescription narcotics overdoses than from all illegal drugs combined. Maybe these guys are getting high on the stuff I’m bringing, who knows?

I start the van. The first snowflakes are starting to fall.

Filed Under: Blog
← The Accidental Rock Star
The Monkey Mind at Walker’s Bar →