It may sound odd, b 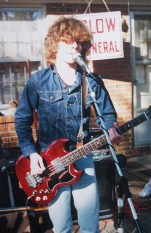 ut I came from a house that had no rock n’ roll records for the longest time, other than a 45 of Elvis Presley’s “Love Me Tender.” My parents weren’t anti-rock fundamentalists; after a certain point in the early ‘60s, they simply lost interest in popular music, so our record collection ended right before the decade really began to swing. We had plenty of Broadway cast recordings, Frank Sinatra and the Smothers Brothers, though, along with “Tom and Jerry play the Guitar’s Greatest Hits,”  an album of Nashville studio musicians performing covers of “Raunchy” and “Rumble,” and really the only thing vaguely menacing and dangerous in our record cabinets. Unless you count Heino, of course.

So unlike many of my contemporaries in the 1980s, I had no classic rock-loving parents to rebel against. And there were no serious musicians in my family, either. My mother could play piano, but “only in the key of ‘C’”, as she said, and my father had no musical talent whatsoever. My grandmother bought me my first guitar at Sears, and after a few lessons, it went into its case, to be forgotten as my interests turned to more introspective pursuits like model rocketry.

Or so it seemed, until my middle school years, when my increasing need to draw attention to myself encountered the music of the Who. They were long past their peak then, but that didn’t matter. Forget about science, I wanted to be in a band! The fact that I hadn’t even mastered three basic chords on the guitar didn’t deter me.

Assuming that four strings must be easier than six, I pestered my parents for a bass guitar, and was rewarded in 1984 with a Christmas present of a Harmony bass and accompanying amp. This time there would be no lessons for me. I would teach myself in fits and starts, until I formed my first band, Slow Funeral, in my senior year in high school, playing whatever songs we could figure out.

Since then it’s been one band after another: the Verge, Sugarcoma, Boxcar Bertha, the Raving Knaves, Empire for Rent. None have become household names, but I suppose if I wanted a financially stable future I would have stuck with the rockets.