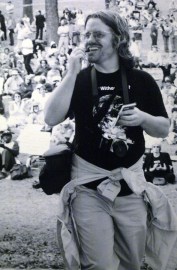 I haven’t always liked writing. I was a poor student, and usually waited until the last possible minute to finish any writing assignments. I loved reading though, and would read just about anything you put in front of me as a kid. Newspapers, Encyclopedia Brown, old magazines, even Erma Bombeck. I can remember reading Dick and Jane primers, and then it seemed as if I just read all the time. My father eventually bought me a dictionary, because he got sick of me asking him what certain words meant, particularly the naughty ones in the pulp paperbacks he let me read.

It was rock music that really got me started writing, though. The words of Bob Dylan, Bruce Springsteen, Joe Strummer and Pete Townshend spoke to me in the depths of my early teenage alienation, and I began writing lyrics before I started writing songs, or even knew how to play an instrument. Most were terrible, wretched middle school attempts to be “poetic.” But I plugged away at it, and got better. Had to, really. When I finally formed a band, we couldn’t play Def Leppard covers all night and had to write our own material. I always seem to be more creative when I can use expediency to justify my efforts.

My entry to journalism came through music, in one of those “too bizarre to be true” moments. My band Sugarcoma was playing at the Somewhere Else Tavern in Greensboro, when local activist Tim Hopkins burst through the door and said he had to speak to the “art band for the working class”, as it said on our flyer. He apparently thought we were communists, though the motto had no particular political meaning. It turned out he was involved with a local progressive monthly, the Greensboro Gazette, and I began going to editorial meetings, volunteering to write, distribute, whatever needed to be done. Eventually I took over laying out the paper on an old Mac IIe we found somewhere. It was a “battlefield promotion”, as it were.

Being as we were all too busy out changing the world to sell advertising, the paper eventually folded for lack of money, and I became the Greensboro reporter for a Chapel Hill monthly paper, the Prism. Then a co-worker at the factory I worked at pointed out an ad in the Reidsville Review for a lifestyles editor at the Eden Daily News, and I duly sent in an application. I had completely forgotten about it when I received a call months later from Paul Curl, the editor. I was ecstatic when I got the job, though Paul later told me that my only competition was a former night watchman with no writing experience whatsoever! Oh, well, in the land of the blind, the one-eyed man is king, so they say.

In the year and a half that I worked at the Daily News, I laid out lifestyles, sports and eventually the entire paper, depending on who had left for another job with little warning, as well as writing and providing photographs. In 2000 I came back to Greensboro, where I worked at the Carolina Peacemaker for six years, earning North Carolina Press Association awards for best photo page, investigative reporting and best special section under the able, though sometimes eccentric, editor Hal Sieber. I left the Peacemaker in 2006, and since then have written for Yes!Weekly and various local blogs. Over the years I’ve covered everything from city council meetings to street protests, but my main interest is the intersection of pop culture and politics.