This Rock n’ Roll is Killing Me. 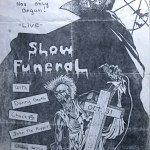 They’ve never been in a rock n’ roll band.

I remember my first gig. It was Halloween night 1987, 20 years to the day after the Stooges played their debut performance. My band Slow Funeral played on my back porch after our first choice of venue, the lead singer’s house, was nixed when he pissed off his father for one reason or another. At that point my brother and I and our friend John had been practicing since the previous spring, having whittled ourselves down from a five-piece. Bashing around with tunes by the Sex Pistols and the Ramones, I don’t know if we would have ever worked up the courage to actually play a show if it hadn’t been for our frontman Chuck.

To me, Chuck was something of a god. An ex-Army medic in his early 20s with a marriage and child behind him, he blew into town from Louisiana that fall with his girlfriend, a former classmate of his high school-aged sister. In my eyes he was an outlaw, a worldly-wise fellow from beyond the confines of Sanford, North Carolina, a living embodiment of the characters in the Jack Kerouac novels I had spent my post-senior year summer devouring. He had a collection of punk rock records and a leather jacket, and when he expressed an interest in singing for us, I was only too glad to take him on.

So we rehearsed in my family’s living room, usually with a coterie of friends hanging around. In retrospect my mother was incredibly lenient, putting up with our noisy renditions of Black Flag and Angry Samoans songs, but she was a lot more open-minded than my absent father, who had moved out a few years before. Or maybe she felt that keeping us in her sight was better than us running about in streets, getting up to who-knows-what.

The gig itself seemed to go by remarkably fast, and the most memorable part of the evening was the emptiness I felt when the music ended and my friends left. I’d hoped that rock n’ roll would help me get over my social awkwardness, particularly with girls, but it would be decades before I realized that that awkwardness, that inability to communicate one-on-one, was what drove me to perform. In front of an audience I could be someone I could never be face-to-face, an irony that persists in some ways to this very day. It’s still easier for me to put these words on a blog where literally billions of people could see them, rather than talk to those closest to me.

Chuck left the next day, headed with his girlfriend to Biloxi, Mississippi. The band carried on as a three-piece; once we’d started there was really no question of stopping. I was addicted to the high that I felt in those 20 minutes we had performed, that sense that as long as I was on stage, I could transcend myself and my limitations through my music. Until recently I still had an original flyer from that night, but I gave it to a friend who looked me up out of the blue after almost 25 years. She’d been at the show but hadn’t recognized me in the semi-darkness of the back porch. When she contacted me she talked about how that event had resonated with her in some undefinable way, much like it did for me. I felt the flyer was rightfully hers, as my first, albeit unknown, fan.