One night in Sanford 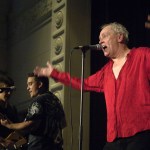 I don’t remember the exact date that I first walked into Don Cole’s Record Hut in Sanford, North Carolina. It was probably the spring or summer of 1984, less than two years after my family moved to the small town in the middle of the state. My mother drove to the store with me; I didn’t have a license yet. And while I also can’t remember the exact conversation that Don and I had that day, I walked out with four early Who albums that I don’t think I even knew existed, and the knowledge that in a town that seemed to want to suffocate my junior high rebelliousness at every turn, I’d found a place that satisfied my burgeoning interest in rock music and all things countercultural.

“You should come see my band,” said Don during a later visit. “We’re going to be playing here.” I don’t know if I’d ever seen a live rock band at that point, except maybe at downtown street festival, or perhaps the Fourth of July celebration at the local shopping center. Those were a bunch of guys playing in broad daylight, however, surrounded by vendors and people sitting in lawn chairs. I didn’t know what to expect at a show at a record store after dark, even in sleepy Sanford. When he told me that they’d be playing songs by the Ramones – a band I’d recently discovered via a handful of seldom-played videos on MTV –  I knew I had to go.

By the night of the show I had gotten my license, as well as a car – a battered Mustang II – and a Nehru jacket made for me by my mother. I was nervous: I’d only been driving by myself for a couple of months, and I didn’t have a friend to go with me. There was no “scene” for an oddball like me to be a part of in Sanford, so I just went by myself.

Like a lot of things that happened to me in my teenage years, the memories of the event are mixed up with the emotions that were created by it. Did they play Cheap Trick’s “Surrender”? I’m not entirely sure, but I know they did “Blitzkrieg Bop”, and the Dead Boys’ “I Need Lunch”, with Don flamboyantly leering at the squealing girls sitting in the front row. I was mesmerized; this seemed like something I could do, given the chance. A future had opened up, possibilities that I hadn’t considered, except maybe in daydreams.

After the show I asked the bass player if the bass was easier to play than the guitar. It was a dumb question, and the answer was along the lines of “Yeah, but you have to have strong fingers to hold down the big strings”. Fortunately, any sarcasm went over my head; I knew from my incredibly poor scholastic career that I would never have the discipline to be Jimi Hendrix, but I could probably hold down big strings. I did 35 pushups every day, after all.

A few days later I asked my parents for a bass guitar. That Christmas I received a Harmony bass with a Holmes amp. I never took lessons, but over the next couple of years I learned enough to jam with other musicians and eventually form my first band, Slow Funeral. It may never have happened without that night at the Record Hut.