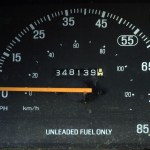 The worst thing about not having money is that every day becomes a series of epic struggles that would have Homer’s Ulysses shitting his britches and running for the hills, just one mind-blowing incidence of brain-frying annoyance after another, until you’ve passed through the many stages of suicidal despair and reached a heretofore unrealized inner plateau of “don’t give a fuck”-itude, a sort of inner peace pursued by generations of mystics but really only obtainable through the total abandonment of one’s cherished hopes and dreams in the face of the modern world’s monolithic indifference. A day, in short, like today.

It started as my days normally do, arriving at my job to pick up yet another load of prescriptions to deliver to the hinterlands. Before long, however, I knew that things were not going to go as planned (as if they ever did). As I exited onto the bypass around Greensboro, the Festiva developed the unmistakable signs of a fuel pump heading south. Losing power rapidly, I coasted to a halt on the shoulder, the engine sputtering on its last dregs of gas. My once-mighty machine, bringer of life-saving ointments and narcotics to the residents of Randolph County, was dead.

I took a moment to ponder the hopelessness of my situation, and the universe’s relentless laughter at my puny efforts to re-start the engine. Admitting defeat, I called my patients to let them know that they would not be receiving their medicine today. All were fine with this, even sympathetic to my situation, except for one who had, alas, taken their last dose mere minutes before and could not go without. Naturally, they were the one furthest out, at the end of a dirt road that would give the 10th Mountain Division pause.

“Oh, well, I’ll deal with them in time”, I thought. Right now, I needed to call a tow truck. In what seemed an amazingly short period of time, if you’ve ever waited for a tow truck, I was on my way home, the Festiva rattling along behind us as the driver and I talked about the weather, always a good subject of conversation if you’ve got nothing else to talk about.

I paid the driver and took a hard look at my options. They weren’t good. There was the emergency delivery, as well as having to go to High Point to pick up a van I was buying. The only transportation I had, however, was my Volvo, with its non-functioning power steering, balky starter and oil oozing out from under the filler cap. Hardly what I wanted to take up Mountain Creek Road in the face of an impending snowstorm, but I had no choice.

After battling my way up the mountain, I experienced one of the day’s few moments of levity when another driver called me and asked if I could pick up a package from his ex-wife, since I’d be in the area. “I hope she set the timer accurately” I deadpanned to the patient as I hung up the phone. “I wouldn’t want it to go off before I get it to him”. Passing through Asheboro, I retrieved the mysterious package and set out for High Point to hopefully put an end to my vehicle problems…

Stay tuned for the rest of my nonsensical adventure!

Filed Under: Blog
← Running on empty
My epic journey concludes →