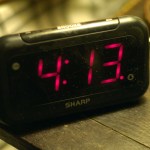 I should still be asleep. It’s 6:53 in the morning, and I woke up how many hours ago? Two, three? I don’t know. I’ve got a doctor’s appointment at 8:45 and after that it’s off the deliver prescriptions. I should be in bed, but I’m not.

I normally get a decent night’s sleep, but tonight it’s hard. I have photos of the Jack Carter & the Armory CD release show on my hard drive, crying to be processed and uploaded. I’ve got an insurance license exam later in the week, and it’s stressing me out, even if I don’t want to admit it. I pull my cat, Mr. Whiskers, closer to me, but his repetitive purring is not having its usual calming effect.

So it’s going to be one of those early morning battles between Creative Me and Responsible Me. Responsible Me wants to get some sleep, so I can function and not fall asleep behind the wheel and kill myself. Creative Me, however, is having none of it. Fiery auto crashes be damned, he’s going to let his thoughts run wild through my brain even if I refuse to get up and write down fantastic ideas that I’ll regret not having documented later. Creative Me, as always, simply doesn’t give a s**t for the demands of the 9-to-5 world.

I finally give in to the madness and get out bed. I upload the photos to Facebook, and am immediately rewarded with a “Like” from either a fellow insomniac or someone who’s headed off early to some horrible job or another. Still agitated, I begin writing this blog post. I’ll be paying for all this later, of course, but what choice do I have? Creativity is a cruel mistress.