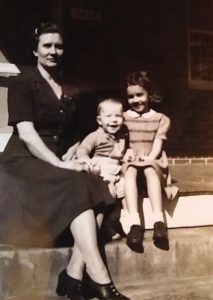 My grandmother with my mother and uncle on the front porch of the house.

Thanksgiving is probably not the best time to hear that my grandmother’s house in Arlington, Virginia, the one place that offered a sense of safety and security in my often-stressful childhood, has been torn down and replaced by a newer, more expensive house. The news, delivered by my mother, hits me harder than I would expect; I hadn’t set foot in the house in over two decades, and my grandmother passed away in 2004.

Over the years, however, I’ve used Google Earth to keep up with the house and the neighborhood around it. The High’s convenience store that I used to get ice cream sandwiches at is ancient history, replaced long ago by a series of restaurants. Ballston Commons, the local mall, has changed out of all recognition; no longer does the bank of windows across the front sport a huge mural of Santa at Christmas or a Phantom jet on the Fourth of July. Now the house itself is gone, replaced by one more suitable to the needs of today’s families.

I’ve lived in plenty of houses and apartments over the years, even owning a house at one point. None of them, even the 504 where I lived the longest and felt most at home, resonates with me the way my grandmother’s did. Beginning in my early 20s, it began appearing in my dreams on a regular basis. Sometimes it was unchanged from the way I remember it; other times it had evolved in highly fantastical ways, yet it was always recognizable. Once it was even inside a larger house, which seems eerily prophetic now.

It’s hard to explain what that house meant to me. For one thing, my father seldom went with us to visit my grandmother, and when he did he usually disappeared for long periods of time, presumably drinking at the local VFW hall. Despite the drinking, he was calmer when he was around my grandmother. Sitting in front of the TV on a summer evening, eating ice cream with a fan blowing cool air on me, was probably the closest it ever came to seeming like we were a real family, rather then just this odd assemblage of people who moved constantly from place to place every few years. With the exception of the years that we spent in Germany, we visited my grandmother at almost every holiday and usually spent a week with her every summer.

Mourning the house, I think about how many of my conversations with conservative voters seem to revolve around change and loss. “Things aren’t the way they used to be,” is a common refrain. It’s odd, the things that give you a sense of place and an anchor in an ever-changing world, and it’s hard when they disappear, whether it’s my grandmother’s house, or the local textile mill, or even a Confederate statue.

Loss is frightening; it reminds us that our time here is finite, and that as we become older we’re no longer the person we used to be, or that we imagined we’d grow up to be. I’m not immune to a fear of change; I worry daily about my ability to adapt to the seemingly exponential technological and cultural changes around me. It’s natural, I tell myself, as uncomfortable and overwhelmed as I sometimes feel, and it’s childish and not a bit delusional to insist that time stand still for my feelings. Others may find it harder to accept new things, and succumb to the easy lure of promises that time can be held in place or even turned back, or that an inevitable process of change is the fault of “others.”

Is there a way to help people deal with change that doesn’t make apologies for or even justify reactionary views?  Traditionally marginalized groups aren’t going to stop demanding a fairer, more equitable society, just as people aren’t going to stop knocking down old houses and building new ones in their place.

I open up Google Earth and look again at the new house. It sits on the same foundation as the old one, but the second story is cantilevered out to create more room – a lack of which, I have to admit, was a problem in the old house. And they left the original garage, albeit covered now in vinyl siding. It even appears to have the original doors on it. Maybe dealing with change and loss is accepting that what’s new will create more space for people, while still preserving a bit of what was once familiar.

Filed Under: Blog
← Last night at the Crow’s Nest at Ziggy’s
No more “normal” →